Freelancing can be a highly rewarding career path. When I got started just over 5 years ago, I had spent as much time being an employee. Looking back, my freelance years have been more fulfilling, interesting, and profitable than my office years.

Wasn’t all roses though, especially in the beginning. There’s this thing I call the Freelance Ladder, and I had to climb it, just like most other freelancers I know. When I say had to, you might think there was no other option for me, and that’s true. But even if there was, I strongly believe that this is also a ladder you want and need to climb to achieve a long-term success. I’ve seen a few aspiring freelancers take shortcuts. Some, I helped do it. But this doesn’t usually end well.

Moving up the ladder is not only about earning more, but also about learning more. And you have a lot to learn and figure out: how to sell yourself, how not to sell yourself short, what kind of clients you like and dislike to work with, whether you should specialize or generalize. These things take time and practice. There’s no shortcut around them.

Here’s the Freelance Ladder, and how you climb it: 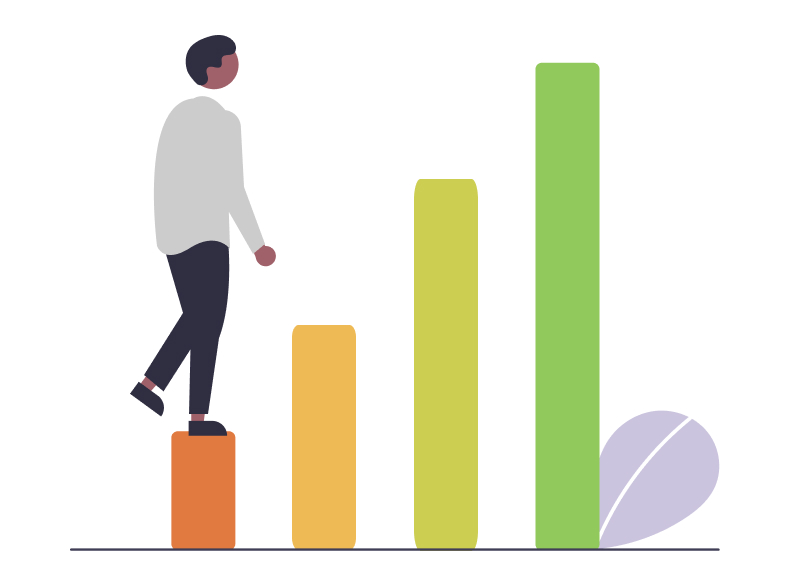 A few notes before we dive in:

You may already be an expert in your field, but until you have something to show for, you are a noob. Know it, and own it.

Get on those freelance platforms and start bidding. But don’t waste time chasing exciting and well-paying jobs. Those attract the freelancers you aren’t yet equipped to compete with. Instead focus on boring, low-paying gigs that require one or more of your specific skills.

The best jobs, both in terms of your chances to land it, and their usefulness towards your ascent on the ladder, are highly descriptive tasks with clear deliverables that leaves not much room for imagination and uncertainty. The client knows what they want and how much they are willing to pay for it. The input, or the effort you put in, doesn’t matter to them. They are paying for the output.

Let’s go with an example. Say I am a freelance WordPress developer on the noob level. This is what a perfect job would look like for me:

Update Plugin X from version 2.3.1 to version 4.7.5. I don’t want it to be updated to the latest 6.0.0 version as it’s not compatible with the Plugin Y version 1.0.6 that we need to keep using. Our previous developer changed its code and we can’t touch it.

It’s perfect for a few reasons:

As a noob, winning hourly jobs is very hard. But there’s one more reason why you don’t even want such jobs just yet. If you are bidding on platforms like Upwork or Fiverr and you land an hourly job by selling yourself too short, this will stick out in your work history and might devalue you in the eyes of your future clients, making your climb longer than necessary.

After winning and successfully completing a few noob jobs, you should have built up some reputation on your freelance platform. You are now ready to step up. You may be tempted to continue winning the noob jobs, as it has become easier for you, but that’s not how you move up.

You already proved your input equals to an output of a certain value. Time to capitalize on this. You now have a chance to win more appealing jobs that pay hourly and last longer. Landing such a job will make your freelance journey more stable, enjoyable and profitable.

Your competition has changed though: instead of noobs, you are now competing with other amateurs and pros. This means your first few jobs will likely be close to the lower end of your desired hourly rate range. That’s okay, it will increase over time. Once you have established your place as an amateur and have a decent, long-term job, you can shake things up a bit to accelerate this growth. There’s no risk in failing. Here are a few things you can try:

If you are not in the acceleration game, no worries. Keep climbing up calmly. But make sure you are climbing. A good way to tell is whether or not your hourly rate and overall work satisfaction is growing. It should be, slowly but steadily.

There’s no clear line between the amateur and pro levels. It’s more like you keep doing things as an amateur until you one day realize you have become a pro.

And there are ways to tell. Things will have changed:

If you find yourself doing some or all of the above, congrats - you made it! 🥳 You are now a pro freelancer.

But the biggest change by far, is realizing that your input is no longer measured by your output. Rather, it’s now measured by the outcome.

Your actions now directly affect you client’s bottom line. Sure, this was true before as well, to an extent. That’s why you were getting paid in the first place. But it was not under your control and was limited. Heck! Remember when you were a noob? Most of the times, you weren’t even told why you had to do what you had to do. Fast forward to now, and I bet that often it’s you who decides what to work on and what to not. The clients only tell you what goals they want to achieve and you figure out the rest.

One more round of congratulations is in order, you deserve it. Keep going, you are doing great! And don’t forget to keep increasing your hourly rate.

Hitting the ceiling is an amazing achievement though - it can make you one of the top paid professionals in your field. This also makes it is quite unlikely. I am nowhere near the ceiling myself and only a couple of wildly successful freelancers I know of may have glimpsed it from afar. I believe it’s a lot easier to move up the ladder once again than it is to actually hit this ceiling.

But the next level is being a legend. How do you become one? Well, I am no legend either, but I have been in the vicinity of that territory a couple times and I can tell you what I know.

Let’s start with the term “fixed price”. You may have already signed a few high paying fixed budget contracts as an amateur or a pro. But that didn’t necessarily make you a legend. For the purposes of this discussion, most fixed budget contracts are still hourly, you just agreed to calculate it upfront, based on estimations and assumptions. This is one more way to increase your hourly pay if you know what you’re doing, or a way to decrease it, if you don’t.

You are a legend when your compensation is completely detached from, and thus no longer limited by the time and effort you put in. Oh, you still put those in, and they’re worth more than most of your competitors’, but that’s not what you are getting paid for. You are getting paid for the outcome your input brings in for the client.

And so, pros still get paid, albeit handsomely, for turning the screws. Legends get paid for knowing which ones to turn.

I write occasionally about being a freelancer, being a founder and my tech stack: Ruby on Rails, Shopify, Jekyll.